When Production Machining magazine sent out the call for manufacturers to submit their nominations for the annual Emerging Leader award, our team was faced with a tough decision. When you look around at our team members, there’s no shortage of people with strong work ethics, talent, and aptitude who deserve to be recognized.

That being said, there was one team member we could all agree on who deserved to have the spotlight shone on them.

Production Machining describes emerging leaders as, “…selfless individuals…who face – and even welcome – challenges head-on. Many have transformed the companies at which they are employed, making these businesses more competitive, efficient, organized and overall better places to work.”

When we think about bright, young leaders who are stepping up to make a difference in the challenging world that is the precision machining industry, there’s no question that our very own Production Scheduling and Customer Service Manager Ben Nikkel fits that description perfectly – which is why we’re so excited to congratulate him on being named one of Production Machining’s Emerging Leaders for 2022!

Ben Nikkel joined Hirsh Precision in 2011 with a sales background in the automotive industry. Shortly after onboarding, he became one of our most productive team players. Through on-the-job training and a willingness to learn, Ben became proficient in operation and setup across various CNC work centers. Before long, he had advanced into a lead role in one of our most complex work centers – our Fastems 5-axis Flexible Manufacturing System.

When a need opened on our customer service team, Ben didn’t hesitate to switch gears and step up into a leadership role. He quickly became an expert with our Infor CloudSuite Industrial ERP system, created a new structure for the customer service department, and diligently trained his team to partner alongside our aerospace, medical device, and industrial customers.

In his role as Production Scheduling and Customer Service Manager, Ben has also honed his ability to bring team members together in an effort to reach a common goal; the strong relationships that he’s able to foster extend not just to his fellow team members, but also to our customers and suppliers.

Armed with his knowledge, experience, work ethic, and drive, Ben Nikkel is an invaluable addition to Hirsh’s leadership team. Not only do our customers enjoy collaborating with him and his customer service team, but all Hirsh team members value and appreciate his efforts. Ben Nikkel is on track to become an executive leader at Hirsh Precision and a pivotal member of our team as we continue to grow.

Ben's Leadership at Hirsh Precision and Beyond

Hirsh Precision has no shortage of talented, hardworking leaders, from those serving in supervisor roles to the team members who step up within their own department to shoulder extra responsibilities and go the extra mile to add value anywhere they can.

Ben Nikkel demonstrates this type of leadership on a daily basis and is not only an invaluable, reliable asset to our company, but his contributions extend further into the rest of the advanced manufacturing industry.

Upon being named one of Production Machining’s Emerging Leaders for this year, Ben had the opportunity to sit down with one of their senior editors and discuss his thoughts on important industry trends like the skills gap, retaining employees, and implementing automation across operations.

“I think young people coming into the workforce today are looking for things that are exciting, challenging, and fulfilling. Anybody that’s been in manufacturing for the last few decades knows that the industry is changing from standing next to the machine running production parts to automation,” said Ben Nikkel, Production Scheduling & Customer Service Manager.

We can say with confidence that both Hirsh’s and the industry’s future looks bright with emerging leaders like Ben Nikkel guiding the way. We’re proud and grateful that he’s on our team. His contributions play a key role in Hirsh’s growth, his ability to mentor and deepen relationships across our team is essential to our success, and his knowledge and expertise make him beyond valuable to the manufacturing industry as a whole. Original Publication Date: November 11, 2021 Meet Zach Mullen Our production team is made up of... 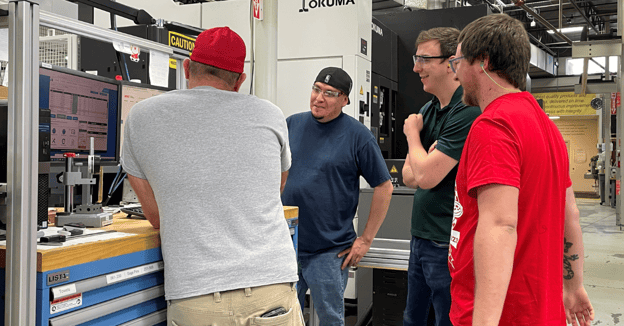